House conceived of as a constant curve, both outside and inside;
photo-reportage by Wiesław Sadurski. 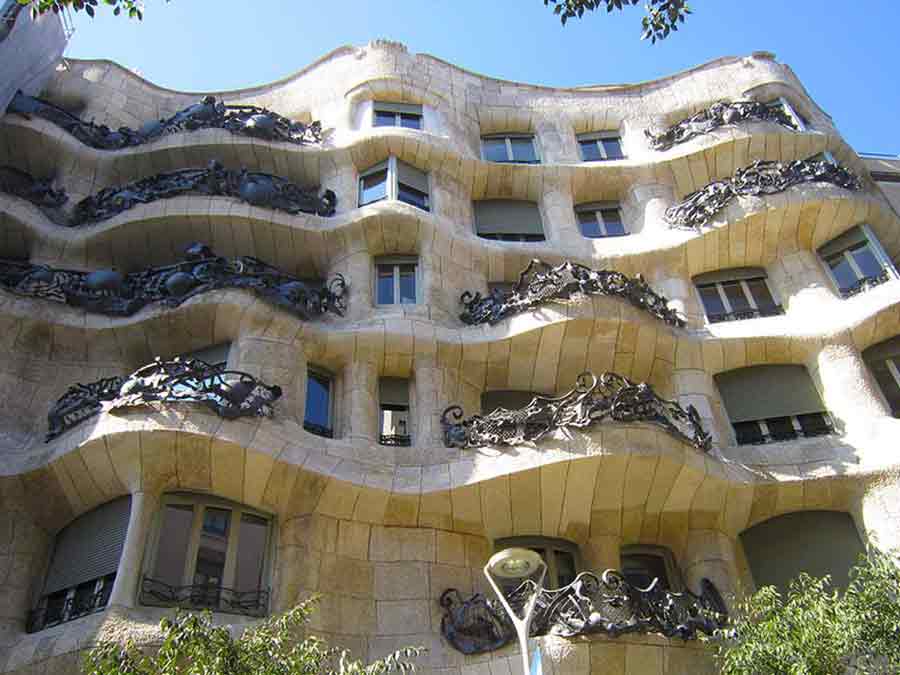 Casa Milá, Front of the building 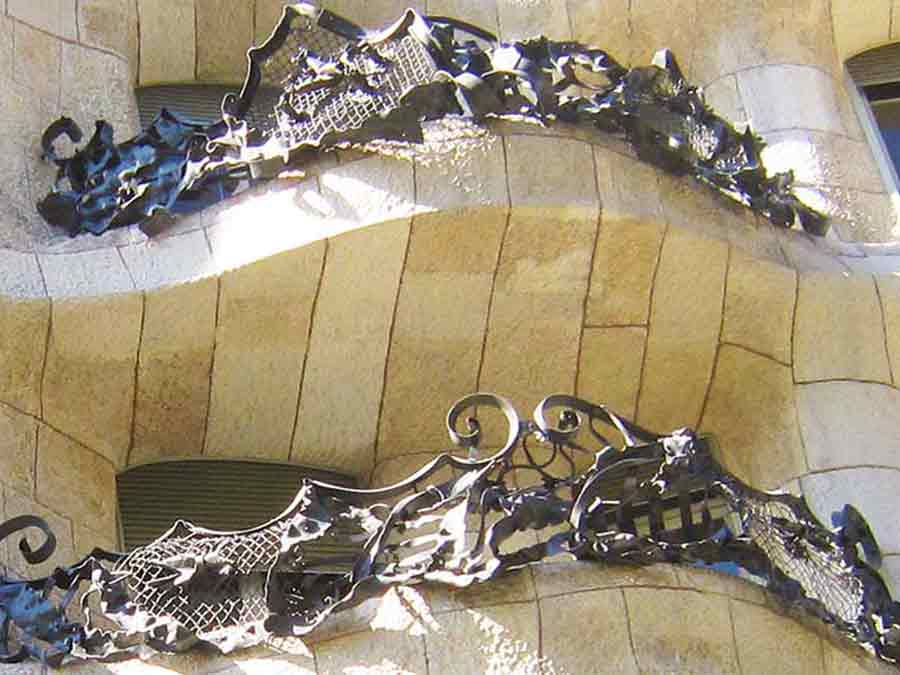 The building is a unique entity, where the shape of the exterior continues to the interior. The apartments feature ceilings with plaster reliefs of great dynamism, handcrafted wooden doors, windows, and furniture, and the design of the hydraulic pavement and different ornamental elements.

The stairways were intended for services, in that access to housing was by elevator except for the noble floor, where Gaudí added a staircase of a particular configuration.
Gaudí wanted the people who lived in the flats to all know each other. Therefore there were only lifts on every second floor so people had to communicate with one another on different floors.

Casa Milà consists of two buildings, arranged around courtyards, which provide light on nine levels. The layout has the shape of an asymmetric "figure eight" due to the different shape and size of the courtyards.

Gaudí started his sketches in his workshop at the Sagrada Familia; he thought of the house as a constant curve, inside and out, combining formal geometry and naturalistic elements.

The most important part of the building is the roof topped with skylights, staircase exits, fans and chimneys. These elements, built of a drum covered with limestone, broken marble or glass, fulfill a specific architectural function, but have become real sculptures integrated into the building.

Casa Milá and Sagrada Familia on the horizon

Casa Milà is characterized by a self-supporting stone facade that connects to the internal structure of each floor by curved iron beams surrounding the perimeter of each floor.

This structural system allows for large openings in the façade, which illuminate the houses, as well as for any structure of the storey, so that all walls can be demolished without affecting the stability of the building. The owners can freely change their minds and easily modify the interior of the houses.

The building has a completely original solution in solving the lobby.

Paintings cover the walls, with access protected by a giant iron gate.

The building has a completely original solution in solving the lobby to not being a closed and dark, but also for its open and airy courtyards connection with that equally important in gaining a place of transit and directly visible to the user accessing the building.

Gaudí, as he had done in Casa Batlló, designed furniture specifically for the main floor. It was part of the concept artwork in which the architect assumes responsibility for global issues such as the structure and the facade, as every detail of the decor, design furniture and accessories such as lamps, planters, floors or ceilings.

Wiesław Sadurski in a dining room of Casa Milá

The unconventional style of the building made it subject to criticism. It was given the nickname "La Pedrera" - "The Quarry". Casa Milà has appeared in satirical magazines.

Homeowners in Passeig de Gracia were angry with Milà and stopped saying hello to him, arguing that Gaudi's strange building would lower the price of land in the area.