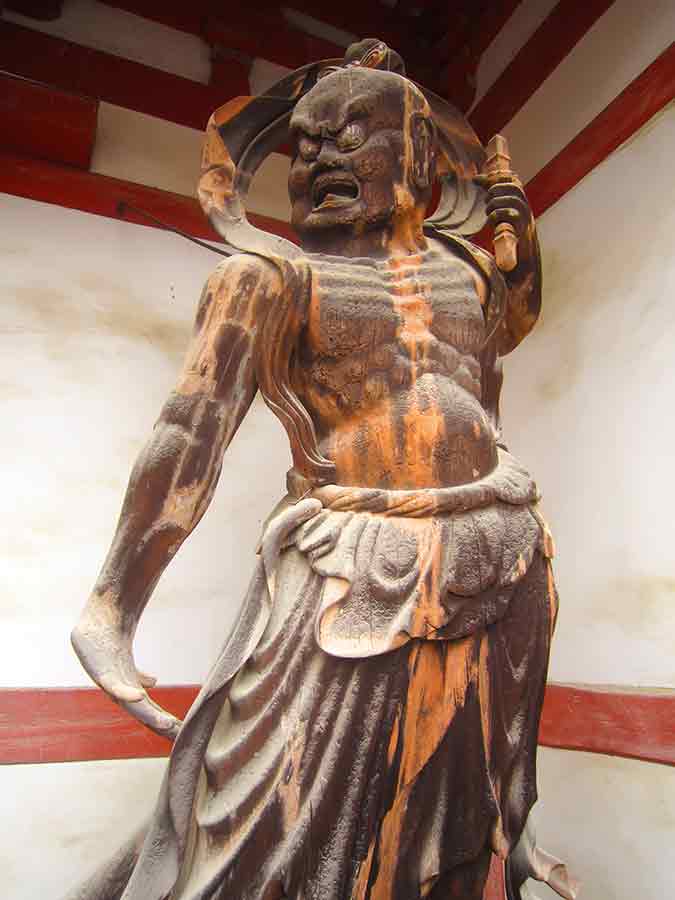 2000 temples in Kyoto. I have visited a lot, enjoying the views through the camera eye.
Deeply touched by the modesty of glory and the cordiality of peace there
I want to share my impressions with you.

The large temple complex includes an entire mountainside. The main temple grounds are located at the base of the mountain and are connected via a hiking trail to several more temple buildings around the summit.

A walk further into the temple grounds gets us to the Lower Daigo area where most of the temple's other important buildings stand. Among them is the Kondo Hall or main hall, which was originally built in 926.

Also in the Lower Daigo area stands a 38 meter tall, five storied pagoda that is Kyoto's oldest verified building. Built in 951, the pagoda is the only structure to survive the fires that have repeatedly destroyed Daigoji over the centuries. The steep trail through the forest leads to the Upper Daigo, Daigoji's original temple grounds, which are located around the summit of the mountain.

is a Buddhist hall containing relics of Budha. The shrine goes as far back as the 7th century. The garden and buildings, centered on the Golden Pavilion, were said to represent the Pure Land of Buddha in this world.

Gold foil covers the upper two levels of Kinkaku, and a shining phoenix stands on the top of the shingled roof. The pond with the Golden Pavilion is the center of the garden, together with small and large islands. Rocks donated by various provincial lords are placed throughout the garden.

Visitors enter the main shrine area through a twin level gate constructed as a replica of the original entrance gate of the palace.

The shrine was built on the occasion of the 1100th anniversary of the capital's foundation in Kyoto and is dedicated to the spirits of the first and last emperors who reigned from the city. Heian is the former name of Kyoto.

A giant torii gate marks the approach to the shrine. It is one of the largest and tallest gates in Japan. The torii is 24.2 meters tall, and the massive supporting beams are 3.63 meters in diameter.

The actual shrine grounds themselves are very spacious, with a wide open court at the center covered with white sand.

TOJI TEMPLE is one of Kyoto's many UNESCO world heritage sites

literally "East Temple", was founded at the beginning of the Heian Period just after the capital was moved to Kyoto in the late 700s. The large temple flanked the south entrance to the city and served as the capital's guardian temple.

The Kondo Hall, one of Toji's original structures, is the temple's main hall and largest building. Destroyed by a large fire in 1486, the building was reconstructed in the early Edo Period in a contemporary architecture style and houses Toji's main object of worship, a large wooden statue of the Yakushi Buddha, flanked by his two attendants, the Nikko and Gakko Bodhisattvas.

Just next door stands the Kodo Hall, which was added in 825 by Kobo Daishi and served as the temple's lecture hall. It too burned down in the 1486 fire, and was subsequently rebuilt in its original architectural style. The Kodo Hall houses 19 statues imported by Kobo Daishi from China, which are arranged according to a mandala with Dainichi Buddha (Vairocana) at the center, surrounded by buddhas, bodhisattvas and the fearful and guardian kings.

Across from the Kondo and Kodo stands Toji's five storied pagoda, which was originally erected by Kobo Daishi in 826. It stands 57 meters tall, making it the tallest pagoda in Japan, and has become a symbol of both the temple and Kyoto as it can be seen from many places across the city.
The ground floor of the pagoda is irregularly opened to the public and houses four smaller Buddha statues.

NIJO-JO CASTLE, was built in 1603 to protect Kyoto Imperial Palace

and as a residence for the shogun when he visited Kyoto. Completed in 1626 by the third Tokugawa shogun, who used the remains of castles such as Fushimi Castle to finish it. It was the Castle that witnessed not only the rise and fall of the Tokugawa, but also overlooked changes in Japanese History.

6 buildings form a diagonal line from southeast to northwest. Each are representatives of a samurai’s house building style. The total floor space of the buildings is 3,300 squared metres, and includes 33 rooms. The World Heritage Nijo-jo Castle in Kyoto is not only a property of Japan, but a common property shared by the whole world.

Entranceway is called Kurumayose. When you walk under the gate, the gorgeously decorated entrance of carved panels fixed above the head of a door will greet your eyes. The design differs on its front and back. On the front are depicted five mythical Chinese birds, pine trees, peonies and at the top clouds, and at the bottom you can see grass.

I am lucky to see all the buildings where photography is strictly forbidden. Room of the tigers used as a waiting place. The place weapons were stored when the shogun proceeded to the capital. The meeting room for the shogun and the feudal lords. Shogun’s living room and bedroom. Places of incredible beauty filled with gorgeous paintings.

before Kyoto was the capital of Japan. The temple was repeatedly burned, and was finally rebuilt by the third Shogun Tokugawa Iemitsu in 1633.

Main Hall of the temple is a national treasure. There are here many other important cultural facilities: the western gate, three-storey pagoda, bell tower, the sound of which rejoiced my heart. Kiyomizu is 1994 registered at the UNESCO World Cultural Heritage List as a monument of ancient Kyoto.

Two of the most famous places is the main temple hall containing the Eleven Headed and Thousand Armed Kannon Bodhisattva, famous for the power of the fulfillment of the prayers and the Kiyomizu Stage, which is an extended veranda of the main hall above the abyss.

Kiyomizu scene is built using a special method: a huge 12-meter pillars of Japanese cedar were assembled without nails, and the floor was made using 410 cypress boards. From the scene shows the wonderful prospect Kyoto.

Kiyomizu-dera means: the temple of clean water - so named from the waterfall Otowa. Water from a source in the mountains is known for its healing powers. I know because I drank it myself.

The beauty of Kiyomizu-dera, enhanced by flowering cherries and green of spring is known as a landscape representative for Kyoto.

It is famous for its thousands of vermilion torii gates, which straddle a network of trails behind its main buildings. The trails lead into the wooded forest of the sacred Mount Inari, which stands at 233 meters and belongs to the shrine grounds.

Fushimi Inari is the most important of several thousands of shrines dedicated to Inari, the Shinto god of rice. Foxes are thought to be Inari's messengers, resulting in many fox statues across the shrine grounds. Fushimi Inari Shrine has ancient origins, predating the capital's move to Kyoto in 794.

At the back of the shrine's main grounds is the entrance to the torii gate covered hiking trail, which starts with two dense, parallel rows of gates called Senbon Torii ("thousands of torii gates"). The torii gates along the entire trail are donations, and you will find the donator's name and the date of the donation inscribed on the back of each gate. The cost starts around 400,000 yen for a small sized gate and increases to over one million yen for a large gate.

was founded by a powerful warrior Taira-no-Kiyomori in the year 1164. Destroyed in the fire, rebuilt in the year 1266.

The great hall is 120 m. long. The main deity of the temple is Thousand Armed Kannon, a giant statue of Buddha sitting in the center, a national treasure of Japan created by sculptor Kamakura Tankei.

Temple also contains one thousand life-size statues of armed deities who are on the right and left of the main statue. 124 statues were made in the twelfth century, and another 876 in the thirteenth century. Each has 1000 arms! Figures are made of Japanese cypress coated with gold.

Before this army are 28 statues of deities that protect Kannon and faithful Buddhists who believe in the Kannon. Many of these deities, whose mythic images are expressed in a vivid manner, have their origin in ancient India.

In January, the temple has an event known as the Rite of the Willow, where worshippers are touched on the head with a sacred willow branch to cure headaches.

are two large temples in the center of Kyoto. As headquarters of the two factions of the True Pure Land Sect, one of Japan's largest Buddhist sects, they are a good place to experience contemporary Japanese Buddhism.

The Jodo Shinshu sect of Japanese Buddhism was founded in 1272 and is based on the teaching that chanting - Praise to the Amida Buddha - can lead to individual salvation.

Nishi Honganji, built in 1591, is the head temple of the Honganji faction of the Jodo-Shin sect with over 10,000 subtemples across the country and 200 temples overseas.

Nishi Honganji's two largest structures are the Goeido Hall, and the Amidado Hall dedicated to the Amida Buddha, the most important Buddha in Jodo-Shin Buddhism. The temple also displays some surviving masterpieces of architecture, including the celebrated Hiunkaku Pavilion. Nishi Honganji is designated an UNESCO world heritage site.

Higashi Honganji was built only 11 years later and a few street blocks east of Nishi Honganji as the head temple of the Otani fraction of Jodo-shin Buddhism. Higashi-Honganji is the largest wooden structure in Kyoto and one of the largest wooden buildings in the world. Next to it and almost as large is the Amidado Hall, dedicated to the Amida Buddha.

YASAKA-JINJA SHRINE one of Kyoto’s most important shrines

If you want to see the role that Shinto really plays in the life of Kyotoites, this is the place to come: people flock here for weddings, to get their newborn babies blessed, to pray for love, success or just spend a little time among the beautiful surroundings.

Note that with lovely lanterns illuminated at night, this is a great place for an evening stroll. It’s also a great place to go on New Year’s Eve or Day, as long as you don’t mind crowd.

CHION-IN TEMPLE is on a grand scale

starting with the vast san-mon gate that serves as the official entrance to the compound.

Before entering the temple, take a moment to admire the mind-bogglingly complex journey that went into the construction of the san-mon gate. Then, step through and climb the steep steps up to the main compound (this staircase was used as a set in the film The Last Samurai). Cross the open plaza and you’ll soon be struck by the awesome sight on the main hall of the temple.