Zen gardens are designed to stimulate meditation, intend to imitate the intimate essence of nature, not its actual appearance,
and to serve as help to meditation about the meaning of life. 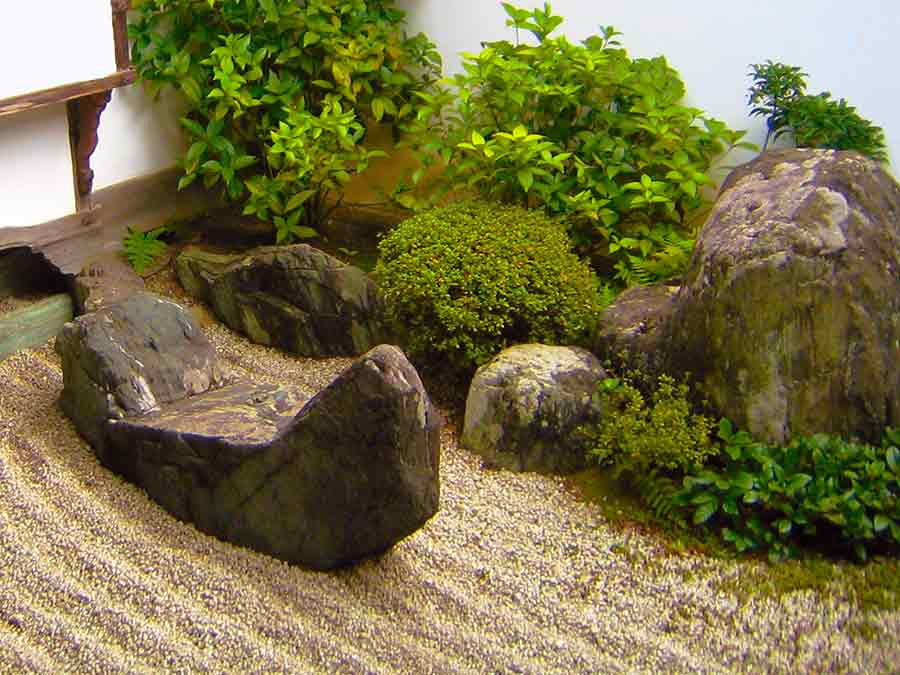 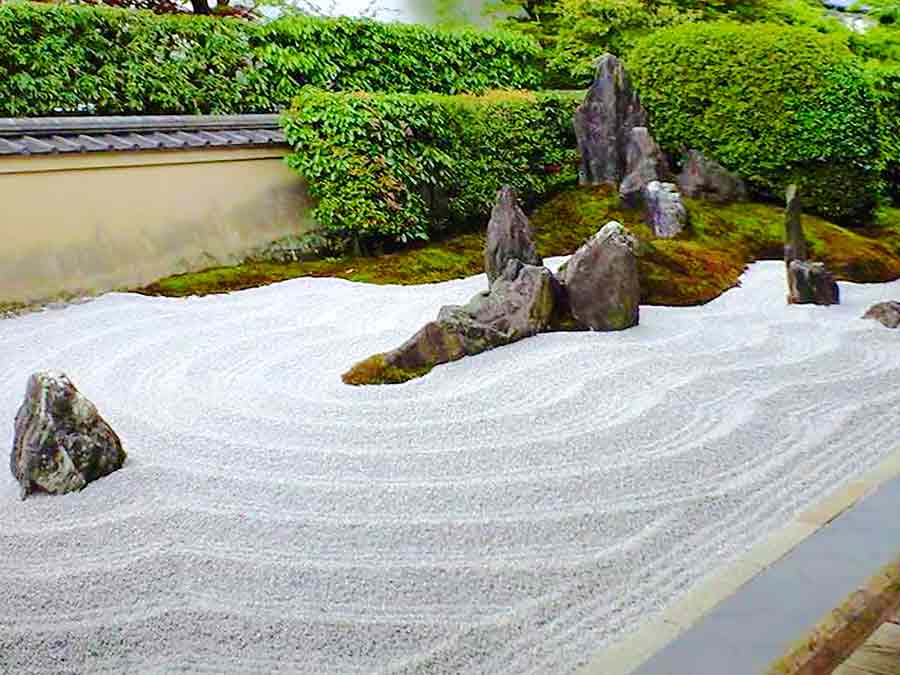 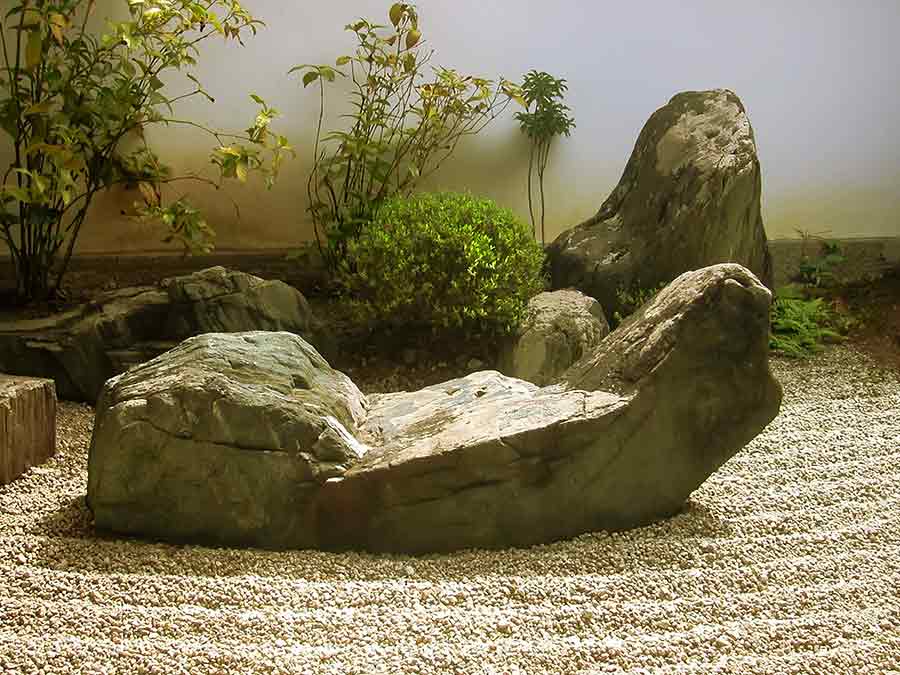 has five small, extremely well-kept Zen gardens, linked together to tell a story.

The 'River' of white gravel represents a metaphorical journey through life according to Buddhism; starting from a dry waterfall in the mountains, going through rapids and rocks, ending in a calm sea of white gravel with two gravel mountains. 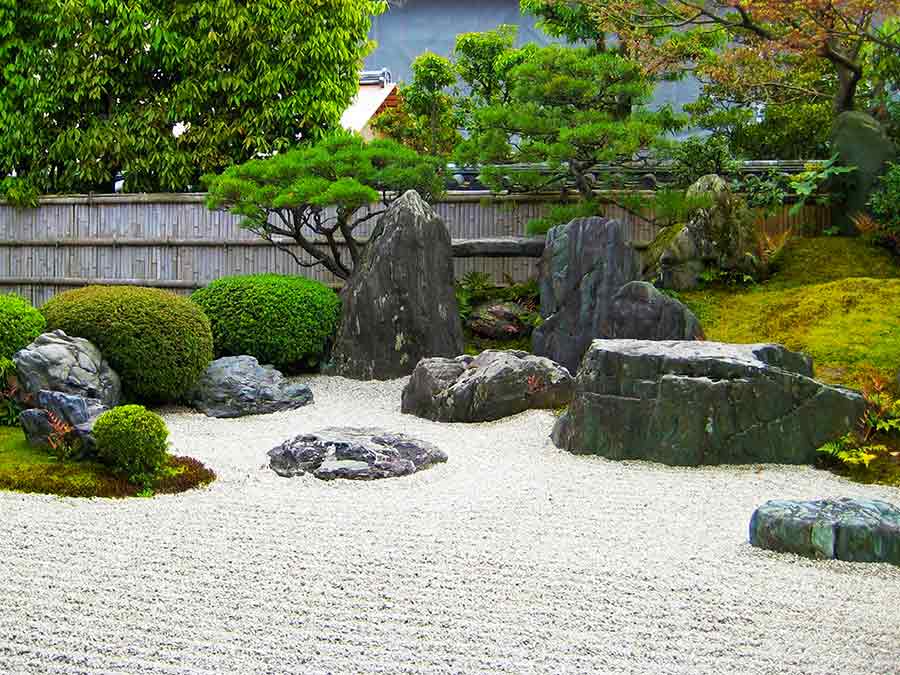 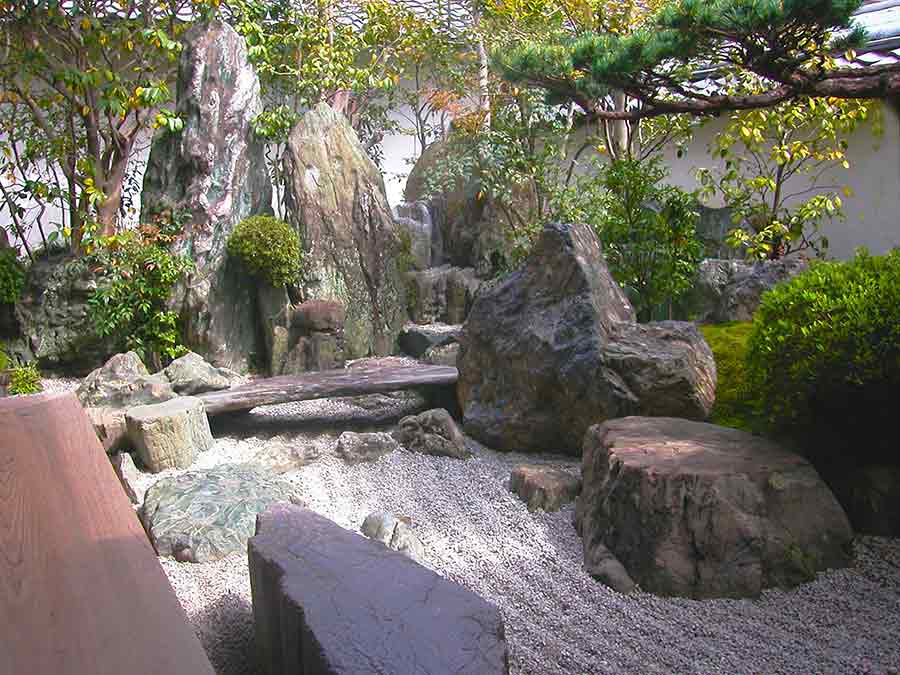 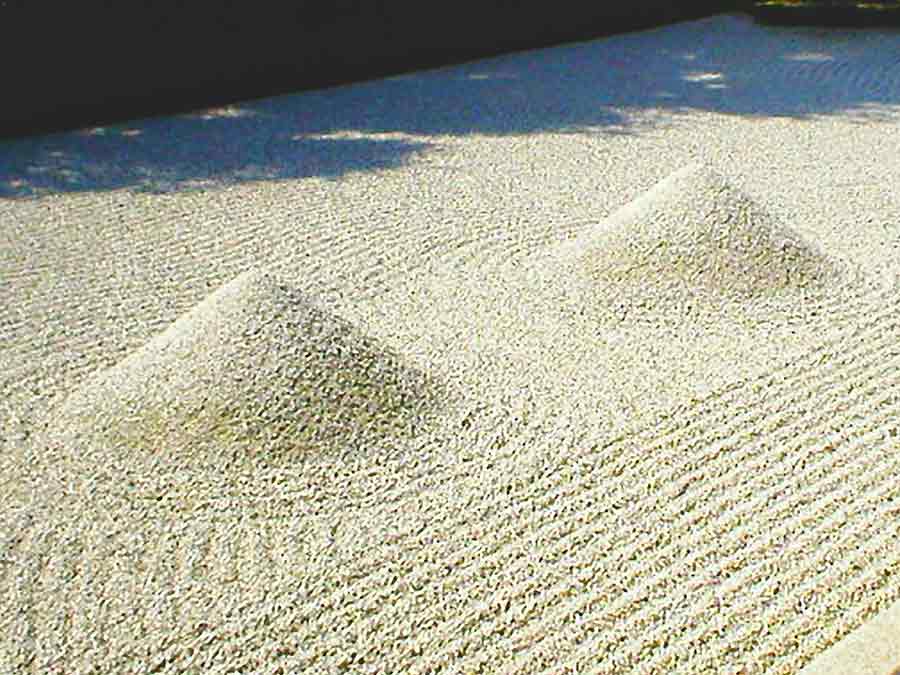 The moss garden is a pond, several islands and bridges, streams, and various plants and trees.
The road climbs up the hill behind the buildings, from which you can see the entire temple area and the city of Kyoto.

Within the Ginkakuji Temple, there is a famous huge sand cone known as the ‘Moon View Platform‘ pictured above.
It reflects the moonlight in the evenings and a monk would sit there waiting for the moon to rise over the Higashiyama Mountains.

Located in front of the Abbots' quarters on the grounds of the Ginkakuji Temple, there is a perfect dry garden known as the ‘Sea of Silver Sand‘. It consists of a two-foot sand platform that covers 0.7 hectar and is intended to represent the sea.

ZEN GARDEN in RYOAN-JI, The Temple of the Dragon at Peace.

Ryōan-ji is the world's most famous Zen rock garden. Built at the end of the 15th century, for the first time the Zen garden became purely abstract. It is a rectangle of 340 square meters.

Apart from the moss clumps around the stones, there are no plants in the garden, only rocks and white gravel. The walls are made of clay, boiled in oil. After a few centuries harder than concrete.

As time went on, a peculiar design was created by leaking oil. Behind the mud wall, a row of trees creates a green background for the garden, making the light gravel appear even brighter. I was lucky to be there in spring when these trees were fully blossoming over the wall.

Fifteen stones of different sizes were placed in Garden, arranged in five groups; one group of five stones, two groups of three, and two groups of two stones. The stones are surrounded by white gravel, carefully raked by monks every day.

The garden is to be viewed from a seated position on the porch of the hōjō, seat of the abbot of the monastery. The stones are arranged so that the entire composition is not immediately visible from the veranda. They are also arranged so that when looking at the garden from any angle other than from above, you can only see fourteen boulders at a time.

It is said that the fifteenth boulder can only be seen after attaining enlightenment.

it is the first of the five great Zen temples in Kyoto and is a World Heritage site. Tenryuji's buildings have been lost many times in fires and wars.

Unlike the temple buildings, the Tenryuji Garden has survived centuries in its original form. Created by the famous Muso Soseki, the beautiful landscaped garden features a central pond surrounded by rocks, pine trees and wooded mountains.

Behind the main hall of Tenryū-ji is the Sogenchi Garden, built by Musō Soseki, a master of garden art in the 14th century in the style: "go for walk". The garden is still preserved almost exactly as in the first days. Features a circular promenade around Sōgen Pond and is designated as a Special Place of Scenic Beauty of Japan.