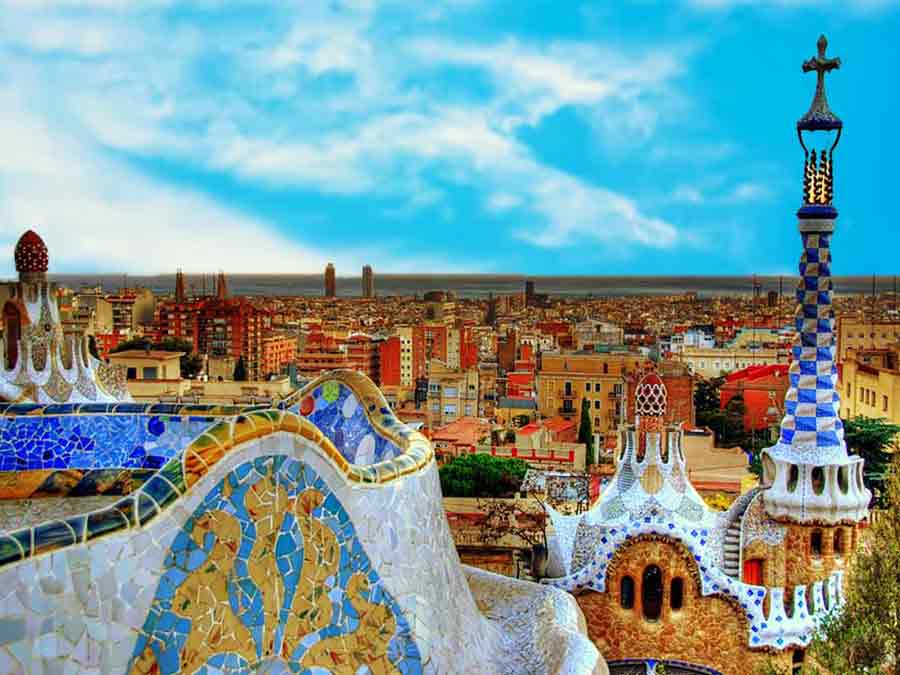 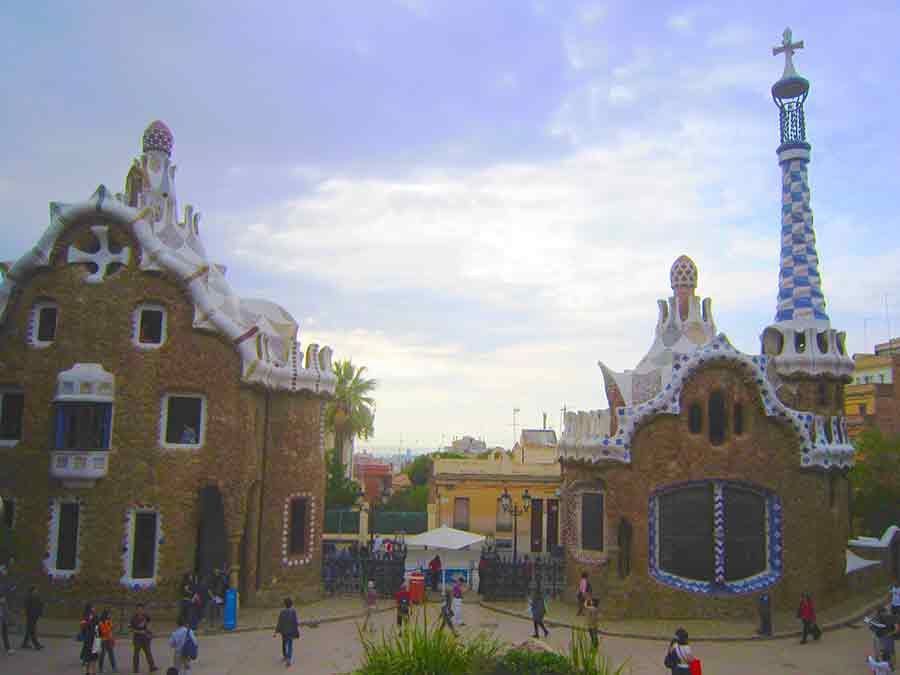 Park Guell is one of the most beautiful parks in the world. At the beginning of the 20th century Eusebi Güell authorized the project to Antoni Gaudi. The park was planned as a private residential area with sixty houses and gardens in the hills of Barcelona. The project failed, the Park is a public space. In 1984, UNESCO added Park Güell to the World Heritage List.

Park Guell Pavilion at the entrance 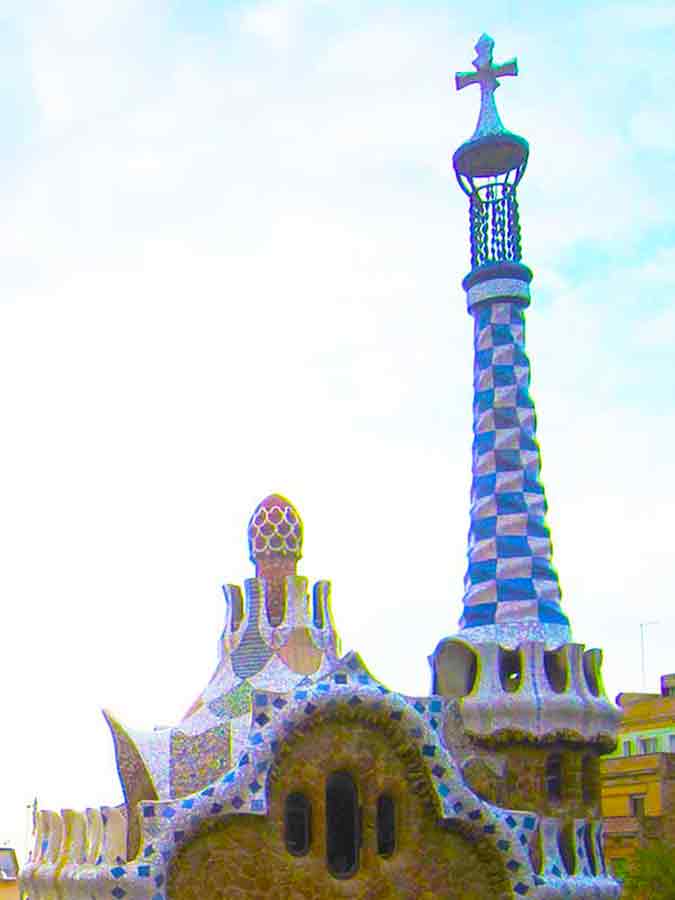 The large cross at the Park's high-point offers the most complete view of Barcelona and the bay. It is possible to view the main city in panorama, with the Sagrada Família visible at a distance.

Roadway in the Park Guell

Colonnaded pathway where the road projects out from the hillside, with the vaulting forming a retaining wall which curves over to support the road, and transmits the load onto sloping columns.

Roadway in the Güell Park resembles the pine trees of the park. In order to fit in, the road and walkways between the terraces were built with stones quarried within the park. Bird nests have been installed in the walkways.

The park was inspired by the English garden city movement. The site was a rocky hill with little vegetation, called Bare Mountain. The intention was to exploit the fresh air away from smoky factories and beautiful views from the site.

Park Güell is the reflexion of Gaudí’s artistic plenitude. The architect perfected his personal style through inspiration from organic shapes found in nature. He put into practice a series of new structural solutions rooted in the deep analysis of geometry and its shapes. To that, the artist adds creative liberty and an imaginative, ornamental creation. Starting from a sort of baroquism, his works acquire a structural richness of forms and volumes, free of the rational rigidity or any sort of classic premisses.

In the design of Park Güell, Gaudí unleashed all his architectonic genius and put to practice much of his innovative structural solutions that would become the symbol of his organic style and that would culminate in the creation of the Sagrada Familia.

The Park Güell seems to come from a fairy tale. It's a strange, unique and even magical place that is certainly nice but a walk through the park brings surpasses even greatest imagination. The strange shapes and bold color combinations that blend with the vegetation of the park, give rise to a world from which the visitor is attracted.

In every corner you can feel the passion of the architect. Gaudí wanted human intervention in this forest blend harmoniously into the landscape; certainly succeeded. Snails, mushrooms, leaves, flowers, tree stumps and elephants appear constantly in the mosaics and the architectural design. Even the extractor for the fireplace in the caretaker building is shaped like an inverted mushroom.

Park Güell is skillfully designed and composed to bring the peace and calm that one would expect from a park. The buildings flanking the entrance, though very original and remarkable with fantastically shaped roofs with unusual pinnacles, fit in well with the use of the park as pleasure gardens and seem inconspicuous in the landscape when one considers the flamboyance of other buildings designed by Gaudí.

Park Guell bench in the form of a sea serpent.

The focal point of the park is the main terrace, surrounded by a long bench in the form of a sea serpent. The curves of the serpent bench form a number of enclaves, creating a more social atmosphere. Gaudí incorporated many motifs of Catalan nationalism, and elements from religious mysticism and ancient poetry, into the Park.

The unique shape of the serpentine bench enables the people sitting on it to converse privately, although the square is large. The bench is tiled and in order to dry up quickly after it rains, small bumps were installed by Gaudí.

Güell Park - bird nests built by Gaudí in the terrace walls. The walls imitate the trees planted on them.

The park supports a wide variety of wildlife, notably several of the non-native species of parrot found in the Barcelona area.

Other birds can be seen from the park, with records including short-toed eagle. The park also supports a population of hummingbird hawk moths.