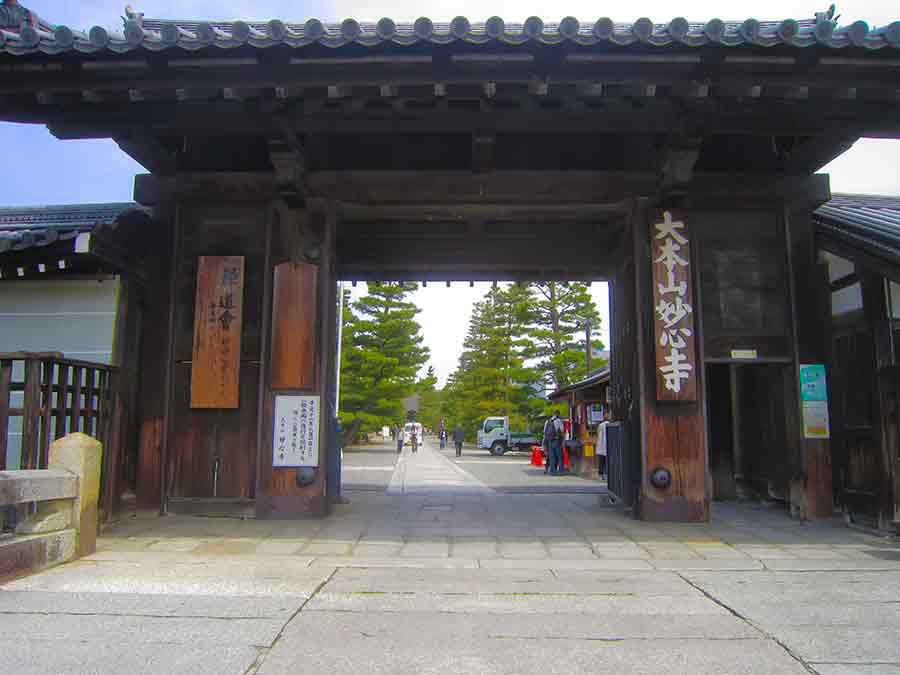 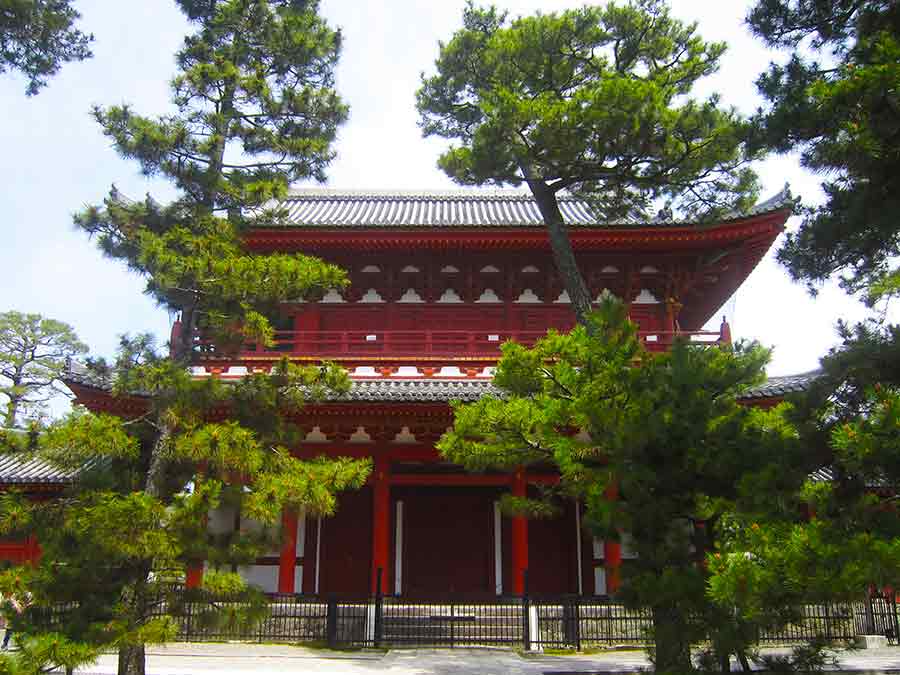 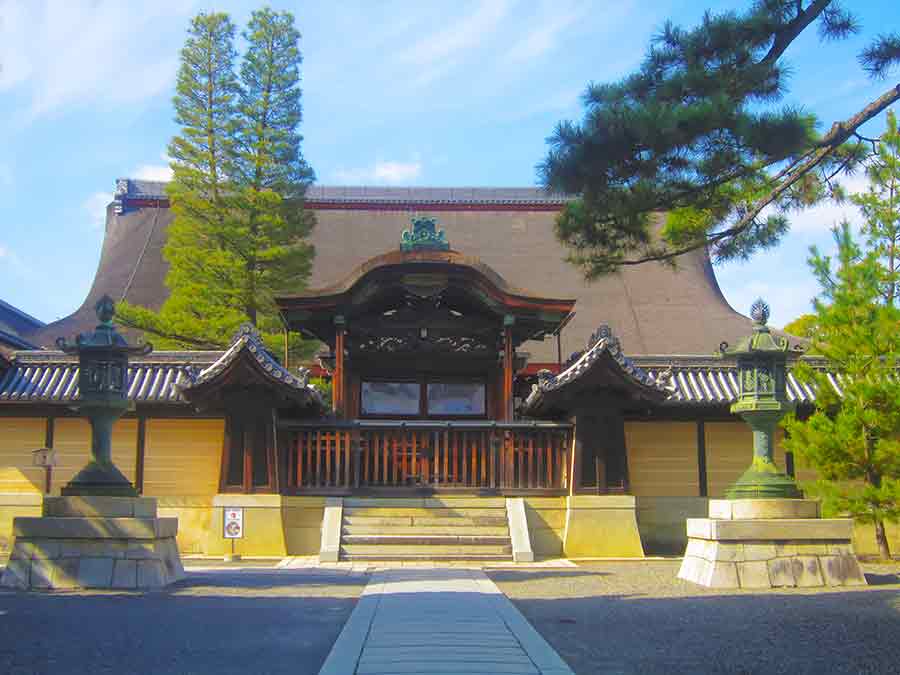 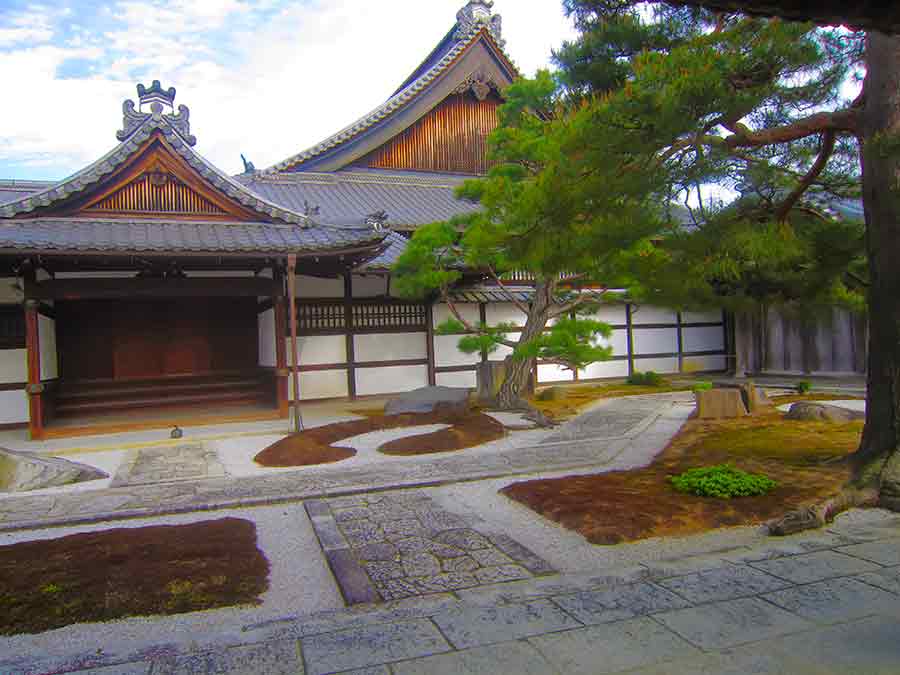 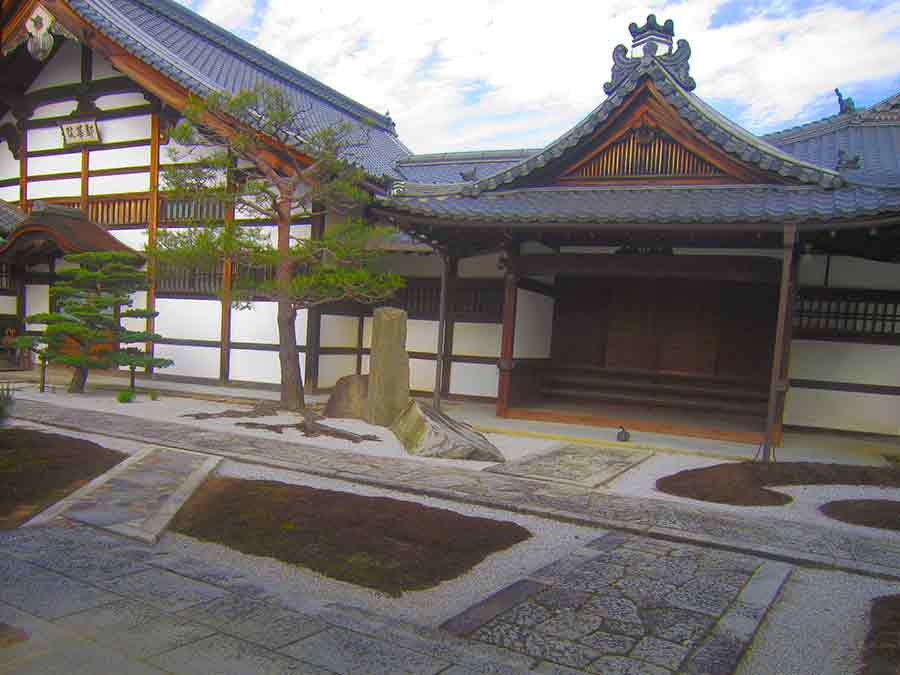 On the western outskirts of Kyoto, not far from the mountains ringing the ancient capital, lies a gently rising plain. From ancient times the nobility kept villas there surrounded by landscape gardens with flowering plants throughout the four seasons. In time the area came to be known as “flower garden”.

MYOSHIN-JI TEMPLE is a large temple complex in northwestern Kyoto

which includes about 50 subtemples in its main temple complex and more than 3400 affiliated temples throughout Japan and the rest of the world. Approximately seven thousand monks are associated with the Myōshin-ji branch of Rinzai Zen.

Myōshin-ji was founded in 1337 when the cloistered emperor Hanazono, a devoted practicer of Zen meditation, converted his imperial villa to a temple.

KENNIN-JI TEMPLE is part of the Rinzai Zen tradition

and considered to be the oldest temple of its kind in the city. Over the centuries, the shrine was often devastated by fire. Consequently, it was repeatedly rebuilt. It also has 14 subtemples on the Kennin-ji precincts and about 70 associated temples throughout Japan.

Kenninji stands in serene contrast to the nightly drama of lust and debauchery in nearby Gion, but has until recently attracted few visitors. Few would have been aware that behind the high walls and locked doors and gates are some exquisite works of Japanese art and Zen gardens.
Kennin-ji Gardens you can see on a page: Zen Gardens 2 in Kyoto.

Kenninji was founded on the request of Emperor and with the support of Shogun in 1202 by the monk Eisai who said to have brought Zen to Japan.

GINKAKUJI TEMPLE, 銀閣寺 is a Zen temple along the eastern mountains of Kyoto.

Shogun Yoshimasa built his villa in 1482 on the grounds of today's temple. The villa has been transformed into a Zen temple after his death.

As the villa of an art obsessed Shogun, Ginkakuji became a center of culture and had a broad impact on the entire country. The arts developed and refined during this time include the tea ceremony, ikebana, noh theater, poetry, garden design and architecture.

Today Ginkakuji consists of the Silver Pavilion, a half-dozen other buildings of the temple, a beautiful moss garden and a unique dry sand garden. Which is shown in a page: Zen Gardens Kyoto.

Silver Pavilion is formally called Kannon Hall. Its two floors are made in two different architectural styles and contain a statue of Kannon, the Buddhist goddess of mercy.

Despite the name, the Silver Pavilion was never covered with silver. It is said that the moon reflecting light on a dark building gives it a silvery appearance. Pavilion is one of only two buildings in Ginkakuji, which survived numerous fires and earthquakes of past centuries. Lately the roof of the building has been renovated and its resistance to earthquakes increased.

TOFUKU-JI TEMPLE is one of the greatest temple complex in southern Kyoto.

The temple was founded in 1236. Tofukuji has historically been one of the principal Zen temples in Kyoto, and is a head temple of the Rinzai sect of Zen Buddhism. Like so many temples in Kyoto, Tofuku-ji burned down but was each time rebuilt according to the original plans.

Tofuku-ji has many sub-temples spread in or around its outer walls. Tofuku-ji itself consists in three areas: (1) the main grounds, which can be accessed freely, (2) the hojo and its gardens and (3) the bridge and the founder's hall. Several parts of temple grounds are free to enter, including the area around some of its largest and most impressive buildings.

The 22 meter tall Sanmon Gate is the oldest Zen gate of its kind, dating back to 1425. Behind the gate is the Hondo (main hall), which is even larger. Surrounding those two massive structures are a number of temple buildings that are rare examples of surviving Zen architecture from that era, including the meditation hall, belfry, bath and lavatory.

The main grounds include several important buildings, such as the main hall and the main gate. But the fact is that it's not the most interesting thing in Tofuku-ji. That honour goes to the Hojo and its gardens. The Hojo is the head priest's former living quarters.

Gardens at Tofukuji's Hojo are unique for surrounding the building on all sides. Each garden has a different character, employing pebbles, large rocks, moss, trees and checkered patterns.
See a special page on the subject: Tofukuji Zen Gardens Kyoto.

The other area consists of the above mentioned Tsutenkyo Bridge and Kaisando Hall, which serves as the mausoleum of the temple's first head priest. The stone path in front of the Kaisando is flanked by contrasting gardens on both sides, a dry rock garden on the left and a lush pond garden on the right.

in the form of landscape gardens, calligraphy, sliding screen paintings, hanging scrolls, tea houses, and many implements associated with the tea ceremony. Many of the finest of these treasures are located in Daitoku-ji’s twenty-two subtemples.

It is a separate world within Kyoto – a world of Zen temples, perfectly raked gardens and wandering lanes. It's one of the most rewarding destinations in the city, particularly for those with an interest in Japanese gardens. The temple serves as the headquarters of the Rinzai school of Zen Buddhism.