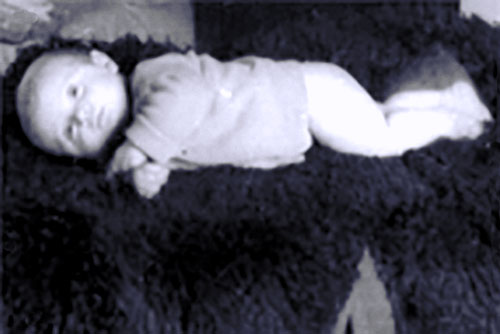 1.8.1940 - born in a small village near Lublin, east Poland, growing up in the countryside during the Second World War. We were a large family working on the land. Dramatic contradictions - like, at the age of 7, I saw the concentration camp Majdanek with all its horrors and a wonderful romantic theatre piece, Balladyna - on the same day.
Best pupil in the school (finished it too early at the age of 12). Early hobbies included gardening, building radios, learning Morse Code, breeding rabbits and pigeons.

1953 - 57 - attended technical school in Lublin, first living in a monastery, then in rented rooms or corners of rooms. Poverty. I read a huge number of books and watched many films. Poland gave a shelter for many children, orphans of the korean war. There were five boys in our class, my best college was Kim, a companion in a school bench for three years.

1957 - graduating at the age of sixteen, I got a badly paid electrician's job. There were good friends there but couldn't stand it for long - too much vodka - and quitted the job. Spent the winter as a homeless tramp. Started writing poems.

1958 - got extremely well paid job as a radio-technician, earning in one day more than I earned in one month in my first job. Fell in love for the first time and ran away 3 days before the wedding day! Had no permanent address, lived mostly in hotels. I loved books, the theatre and concerts, modern physics and philosophy. Yeah! I was 18 when I first visited an art gallery.

1960 - 66 - as a man of twenty, I wanted to escape military service - therefore needed to study something - and chose philosophy at the Warsaw University. Many artists in my immediate circle. I had poems published in various art magazines, winning prizes for them and also for short-stories.

1966 - 70 - writing drama and short-stories, happy in love, earning money on radio advertisements or jobbing as a reporter.
1968 - one year long Scholarship name of Tadeusz Borowski.
1969 - Produced my first series of Drawings using pen and ink on paper. Learned by copying masters.

1970 - left Poland for Sweden, started exhibiting, living on the road. First acid experiences showed that drawing was not the way. Gave it up, wrote Reportage and Konkut (in Polish only) in next couple of years. Becoming vegetarian, no more alcohol, psychedelics only.
Za-zen, traveling - and then in the spring of 1973 I created first thousand Monotypes - which was a turning point in my life. Soon I developed my own technique and called it Print-Painting. My atelier became a wonderful factory. An additional color was added to the painting per day, enabling me to make many different copies. Nobody had seen anything like it before.

1975 - Amsterdam, West Berlin, then back again to Stockholm, new atelier, love and approach. New matrices for my graphics were born out of simple drawings. Abstract thinking. I started to use 3 basic colors only. Spectral Print-Paintings.

8th of December 1975 - the end and a new beginning...
hung the papers up to dry, put some on the floor, which meant that I had to walk between them on all fours - standing up, I hit my backbone against the sharp corner of the table and fell down on my face. Spent four weeks in bed. Good-bye Print-Paintings! I was able to walk again but my back was still painful, I couldn't even hold a cup of tea in my hand. Fortunately the brush was light!

That is how I came to the Paintings of Creation, work which has continued ever since then. Some paintings were created in one go, others had hundreds or thousands of layers. I called it - Art Yoga. My first exhibition of paintings was successful - all the large paintings were sold, which made possible to have an atelier with enough canvases and oils for next two years - in Warsaw.

1978 - moved to West Berlin where I planned to stay for a couple of years on the way to New York... One year long writing a story, prose, in Polish. Painting on the street, having fantastic feedback from all kinds of people who were 'normally' not interested in art. Exhibitions, work in acrylic colors - Light Worlds.

1979 month of May - I'll tell you a story; in West Berlin there was a house called Kudamm-Karree; I went to the Gallery there with my portfolio - the secretary took them to show to the director.

I went again a week later; the director was busy with the conference. After a week - he was for lunch.

The next week, the secretary told me that the boss was absent, but he had already made his decision - I was invited to exhibit the paintings on all five flours in the house. On one condition - I will be present in person every hour of every day.

A nice surprise. I took a coffee from the bar and went upstairs; I sat down on the top marble step. Elegant house - full air conditioning!

While sipping coffee, I thought about the meaning of life. My life. I went home for a sandwich and after a while I was in the flowering Schlosspark meadow in the tall grasses. Hot day! I undressed slowly and gave myself to the sun. An hour later, my DECISION appeared. I will not have an exhibition. I will never visit a gallery to ask for an exhibition. I will never act in business.

My DECISION that day defines all life - until today! - I have never introduced myself to anyone, I have never asked anyone for anything. Artistic extremist!

1980 - a year-long break in painting activity - homeless in West-Berlin.

1981 - based in Kreuzberg (American Sector in Berlin), with a brush in my hand, jobbing in many places and occupations, decided to 'drop out' and have no more exhibitions ! Yes, I revolted against art-market, finding West Berlin art scene quite imperialistic.

1982 - 84 - a time of basic cleansing and decision making... Cleansing - 30 days fasting, living on water, sunlight and yoga. Then I met Saint Thakar Singh and was initiated into the Yoga of Light. Very intensive work. Paintings flowed from my brush: series of Cosmic Landscapes, then One Touch paintings, Labours of LIght, then progressing to Blue of the Mystic and the first series of Spectral Paintings.

1984 - everything seems to have its own story. One of my jobs was an Atlas of Man's Anatomy. Half a year of studies and drawings ended; then, having suddenly nothing to do, I enjoyed a new freedom and started to sketch People Faces. Drawing lines was quicker than perceiving them. I concentrated solely on the vibes of my subject. Soon all the walls in my atelier were covered with faces and I heard them speaking. Started to write down poems to go with the sketches and answer the question: 'who are you?'

1986 - my daughter Veronique was born. Exhibiting paintings again: in my atelier, then in places where I was invited.

A friend of mine, an astrologist, offered to make me an astrological chart as a gift for my birthday. I accepted on the condition that there was no mention of the future. She told me wondrous stories about previous incarnations and karmic relations. Usually I forget what I hear, but there was one very interesting detail - she asked me if I knew something about an accident, supposedly happening during the fifth or sixth month of my mother's pregnancy.
She told me that I died for a while in my mother's womb - that is to say, before I was born! Only now, could she understand and know the meaning of my paintings - these were remembrances of dying!
Well, you can be sure that during the visit to my parents I asked them about this and whether such an accident had occurred. They did not remember anything that evening but 24 hours later my mother started to talk! They went on to discover again what had been forgotten for almost half a century.
Yes! there had been an accident when no movement had been felt in her womb for three long days and nights There were no doctors around and no way to travel to town (it was during the first year of the German occupation). Their only recourse: herbal baths and praying. Well, I came back, eventually, for good or bad... Then, with my questions and their remembrances the greatest surprise in their life occurred.

1988 and life after - as a single parent with daughter.

As a father, I debuted even later than as a painter, and at the very beginning everything seemed to be colorful and made of light (worlds).

I was left on my own with my daughter, when she was in the second year of life and needed care day and night. If you have children you know it's a full-time job! Most tragic - I had to get up so early every day! But it was possible, I painted a lot that year.

2002 - My daughter Veronique in secondary school, clever and sharp little lady.
Life is friendly to us. We travel: Italy, Spain, Sweden and visit Poland, Veronique speaks Polish very well cause I spoke with her Polish all these years. I paint Rainbow Spectrals.

2003 - Do you have any problems with your inner life, family, creativity? I advice a heart stroke. Some weeks later my life turned into fairy-tale.

2015 - Winter in India. Back in Berlin heart stroke and following surgery.

2016 - Springtime in Japan. Back in Berlin heart stroke and following surgery.

2017 - Summer in Georgia. Back in Berlin heart stroke and following surgery.